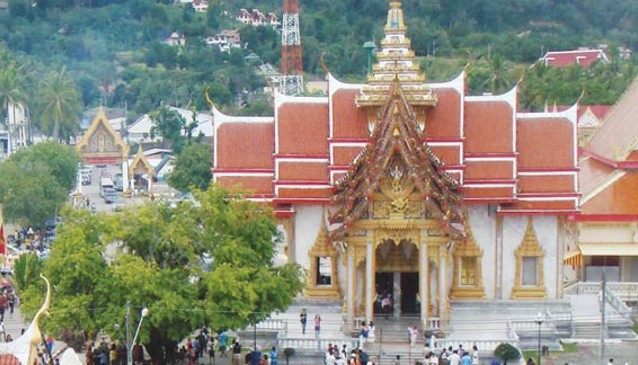 Wats are sacred places for Buddhists and most Thai people follow this religion. Of the 29 Buddhist temples in Phuket, Wat Chalong is the most well-known due to its history and that the fact that it is the most ornately decorated.

It is thought that the original Wat Chalong was built during the reign of King Rama II (1809-1842). Since its relocation, it has been renovated and augmented. The temple contains several structures and halls. One of the halls features a gilt-covered statue of the famous and revered Luang Poh Cham statues of Luang Poh Chuang and Luang Poh Gleum, all ex-abbots of the temple. The Grand Pagoda is decorated with wall paintings depicting the Buddha's life story and features various Buddha images. The air-conditioned 'exhibition home' of Luang Poh Cham contains lifelike human-sized wax models of Luang Poh Cham, Luang Poh Chuang, Luang Poh Gleum, and Luang Pu Thuad along with antique Thai furniture, and Benjarong (Thai porcelain designed in five colours).

Wat Chalong is associated with three revered monks of Luang Pro Chaem and Luang Pho Chuang who were herbal doctors and setters of bones. The monks, paticularly Luang Pho Chae, helped the people of Phuket put down the Ahngyee (Chinese Coolie) Rebellion in 1876 during the reign of Rama V. Luang Pho Chae encouraged the people to stay and fight and subsequently put down the rebellion. To show appreciation, the King bestowed upon Luang Po Chaem the title of Phra Kru Wisit Wongsacharn. Buddhist Thais stick gold leaf to these images as a part of paying respect.