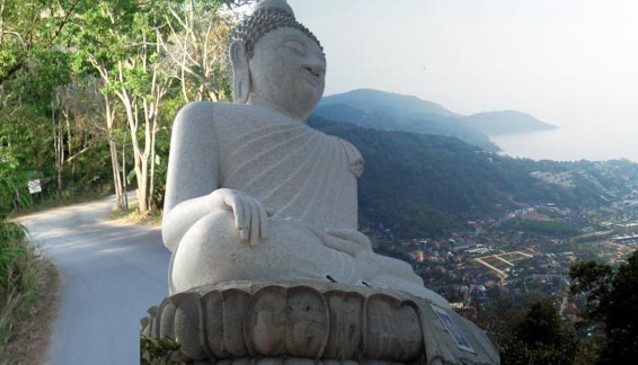 Perched atop a 380 metre hilltop in Nakkerd Hills between Chalong and Kata is Phuket's newest man-made attraction, Big Buddha or Ming Mongkol Buddha. This structure is dedicated to His Majesty King Bhumibol Adulyadej in honour of his 80th birthday. There is also a smaller Brass Buddha that is 12 metres high and is constructed of 22 tons of brass, which is dedicated to HM Queen Sirikit.

The Mingmongkol Faith 45 foundation with Suporn Wanichakul as its president was established to oversee the construction, which began in 2002. Big Buddha is 25.45 metres wide at its base and 45 metres high and is made of reinforced concrete casting adorned with white jade marble. The weight of the white jade marble is approximately 135 tons.

Big Buddha faces eastward and looks over Chalong Bay and beyond. The site offers 360 degree spectacular panoramic views of Phuket, the islands and the Andaman Sea.

The project has been entirely funded by donations and opened in 2010 with a landscaped park and museum.