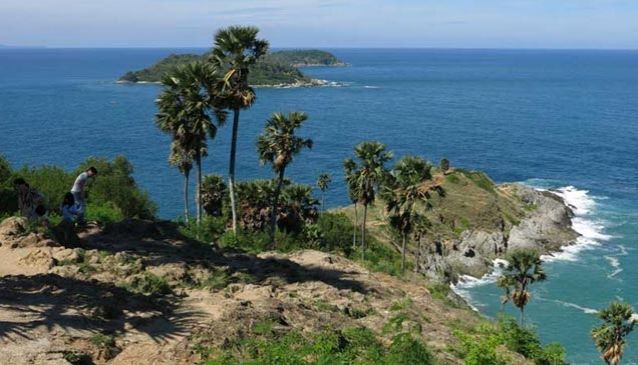 The end of Phuket on the southwest coast, known as Cape Promthep or Laem Promthep, is arguably Phuket's most photographed and romantic spot. It has long been the favourite place to watch the spectacular sunsets the island is known for and to admire the stunning views of local islands and the sea beyond.

The name Phromthep comes from 'Prom', which is Thai for the Hindu word signifying purity and the god of creation, 'Brahma' and 'Thep', which means 'God'. People in local villages once called Promthep Cape 'Leam Jao', or 'God's Cape'. Centuries ago, it was a navigation landmark for seafarers traveling between the Malay Peninsula and points westward.

There's a shrine dedicated to Brahma, the Hindu god of creation, that is noted for the its many carved elephants. The elephant is the mount of Brahma and is also the symbol of longevity. Devotees leave figures as gifts for either requesting a wish or for being granted one. There is the Golden Jubilee Lighthouse, which contains a small nautical museum, and holds an observation deck from which views of the area are the best. Cape Panwa and Chalong Bay with its islands can be seen and the Phi Phi Islands 48kms away, Koh Racha Yai and Noi are visible on a clear day.

Looking up the coast, one can see the small Yanui Beach, Windmill Viewpoint and Nai Harn Beach, which are easily reached from Cape Phromthep and are just minutes away. Many people often chill out at the beach during the day and then come to the Cape for sunset.

The rocky promontory is windswept and has been bashed over time by breaking waves during the monsoon season from May through November. The adventurous may wish to make the trek along the promontory towards the end. A word of caution: be careful with your footing especially when the elements are running fierce!

For the dining with a view experience, there's the Cape Phromthep Restaurant an open air place to eat, which commands a stunning backdrop of Yanui and Nai Harn Beaches. Cool breezes flow through and diners can enjoy seafood and Thai dishes while the sun sets and under the stars. Those looking for souvenirs of the viewpoint, can find T-shirts and other items by the parking area, in stalls which also sell sarongs, batik, beachwear, handicrafts and street food.

Cape Phromthep is a popular place for both tourists and locals especially at sunset. If you do want some romantic moments with your special someone to watch that fiery ball sink into the Andaman Sea, be sure to find a spot early. This spectacular light show may be short and sweet, but it's definitely worth it!

There are many other popular viewpoints! See Phuket View Points.