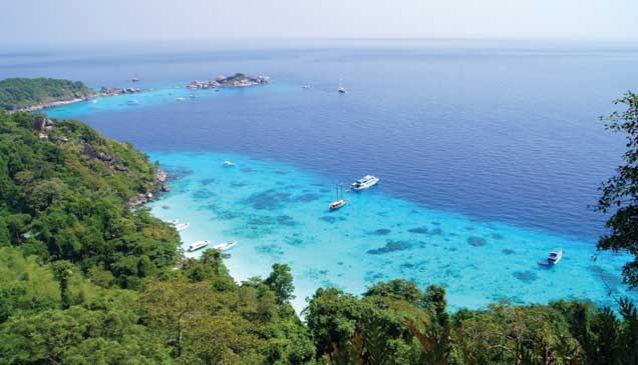 The Similan Islands were incorporated as a marine national park in 1982 and are located approximately 50 kilometres west of Khao Lak and 80 kilometres northwest of Patong. The nine islands are composed of granite with superb beaches and surrounded by clear blue water.

Scuba diving is the most popular activity as divers and to some extent snorkellers, can see the diversity of marine life and the exceptional underwater visibility. The islands are well known for their huge rocky dropoffs on the western side and their long coral reefs on the eastern side. In between, there's everything else! Whale sharks and manta rays are often seen.

Both day trips and liveaboard charters depart from Thap Lamu near Khao Lak and Chalong and Patong on Phuket and sometimes from Koh Lanta.

Aside from water activities, visitors can bird watch and relax on the beaches.

There is a national park entry fee of 400 Baht per person and a daily usage fee of 200 Baht per diver per day.

Accommodation is provided by the Park and is available on only two of the islands. Tents have sheets, pillows, a floor pad and a mosquito net. Bungalows are available on one of the two islands.

The Similan Islands have been noted as one of the top ten dive destinations in the world according to the National Geographic Society and are scheduled to become a UNESCO World Heritage Site.

High season in the Similans is from December until April, when the monsoon stays far away. The best period to visit is March, when the winds are calm and the water clear. The national park is closed from roughly mid-May through October.