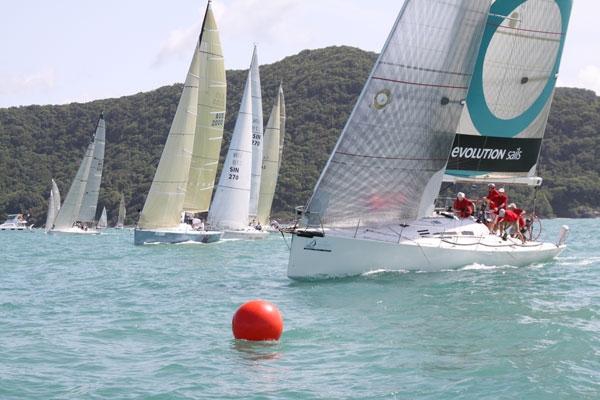 On the water Boating events

Phuket Raceweek sees 35-40 boats from all over Asia, and approximately 400 participants from around the world, compete over four days of intense and action-packed racing amongst the stunning islets surrounding Phuket.

A combination of round-the-cans and round-the-islands courses gives the varied fleet a mixture of challenging and scenic racing, while the legendary regatta parties, with unlimited free buffets, drinks and entertainment, ensure nobody leaves Phuket without having an all-round fantastic regatta experience.

And then there's the 'Regatta Bar', open each day offering ice-cold post-race beers and post-race bragging rights as you come off the water.

Raceweek is raced over six or seven classes (depending on entries), including IRC Classes; Sports Boat; Bareboat Charter; Cruising; Multihulls; the breathtaking Firefly 850 and the splendid Classic Class.

Charter a yacht to race: Phuket has a large and varied fleet of charter yachts available for competing in Phuket Raceweek. The regatta organisers can assist with 'Yacht Only' or 'Yacht + Accommodation' packages for overseas participants. Less experienced sailors can opt for a skippered yacht. For those who want to make a longer holiday out of it, a Cruise + Regatta package can be arranged. Check out the regatta website for details.

For information on cruising around Phuket, check out www.southeastasiapilot.com

Sponsorship: What sets Raceweek apart from other regattas is the attention paid to the professional management of sponsorship. From the first contact, through to signing a sponsorship agreement, until after the event winds down, sponsorship marketing is managed by the Raceweek team whom work directly with the sponsor to ensure that agreed benefits are delivered in full and that marketing opportunities presented by the event are fully maximised.