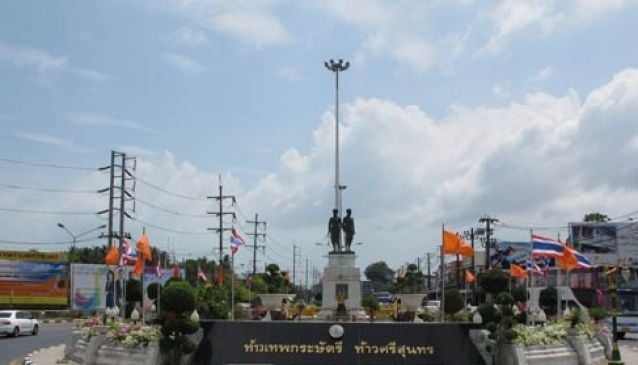 In 1785, sisters Chan and Mook led the local people of Phuket (many of whom were women) to fight a Burmese invasion.

Chan was the wife of the governor of Thalang, the largest town in Phuket until the late 19th century. After his death and upon the Burmese attacks that year, the two sisters rose to defend Phuket and with their people, succeeded in winning the war. The twosome were given the honorary titles of Thao Thepkasattri and Thao Sri Sunthorn by King Rama I.

The main road from Phuket Town to the airport is called Thepkasattri Road. There are temples in the Thalang area named after the heroines as well. The landmark is also a shrine where people come to pay respect to the pair.

The monument was built in 1967 and the nearby Thalang National Museum, which houses information on the ladies, was built in 1985. There is also an annual event, the Thao Thepkasattri-Thao Sri Suntorn Festival, which occurs in March. It is one of the major festivals and features both cultural and sporting activities with the highlight being historical show about the history of Phuket.