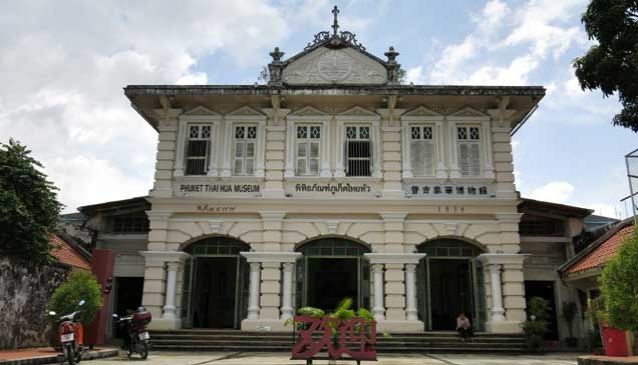 Originally the first Chinese school on Phuket and established in 1934, the Thai Hua Museum showcases exhibitions in 13 rooms which show the Chinese migration to Phuket and the Chinese-Phuket people's way of life during the tin mining era in the early 19th century. Exhibits housed in 13 rooms, which include photos and videos show their way of life from their native land, their economic and social success traditional rites, other Sino-Portuguese old buildings, the dress and diet of the Baba people. The museum is located in Old Phuket Town.

Room 1
''Chinese Migration' shows the path and journey of Chinese immigration to Thailand in Phuket, from more than a thousand years ago in the Ayudhya era or approximately 300 years before and the Rattanakosin era or 200 years from now.

Room 3
'Phuket-China Relations' displays the factors which created the relationship between Phuket and Chinese people.

Room 4
'Patronage' shows the life history of the main supporters for the Chinese schools in Phuket.

Room 5
'Looking Back' show the building and school history along with the principle of Chinese housing consturcion, architectural identity and archaeological clues.

Room 6
'The Chinese of Phuket' showcases exhibits of the Phuket-Chinese way of life in the past during the occupation, livelihood, literature and intellect of Phuket people.

Room 7
The 'Tin Mining' room shows the importance of mining and the Chinese who contributed to its production and to the development of Phuket Town.

Room 8
'Attire' shows the patterns, characteristics and source of dress and costumes for the Phuket Bab people.

Room 10
'The Chinese School' reveals the background of the Chinese school from its initiation through descriptions and photos.

Room 11
'Old Building' identifies the Sino-Portuguese style of buildings in Phuket, displaying their background and specialness.

To see more on Chinese culture and traditions, Baan Chinpracha a mansion owned by wealthy Chinese in the tin mining era.